Meet Our Board of Advisors

The Joffe Team is proud and delighted to introduce our Board of Advisors. Composed of distinguished professionals spanning the education, health, law enforcement, technology, and media fields, our Advisory Board brings diverse expertise and experience to guide Joffe Emergency Services through our next phase of growth and service goals.

Since our founding in 2007, our mission has always been to make communities safer.  As we continue to invest in our teams, processes, and systems, our commitment to excellence extends to the company we keep.  It is a true privilege and honor to welcome this esteemed group of experts into our community — each of whom shares our vision of creating safer communities together. 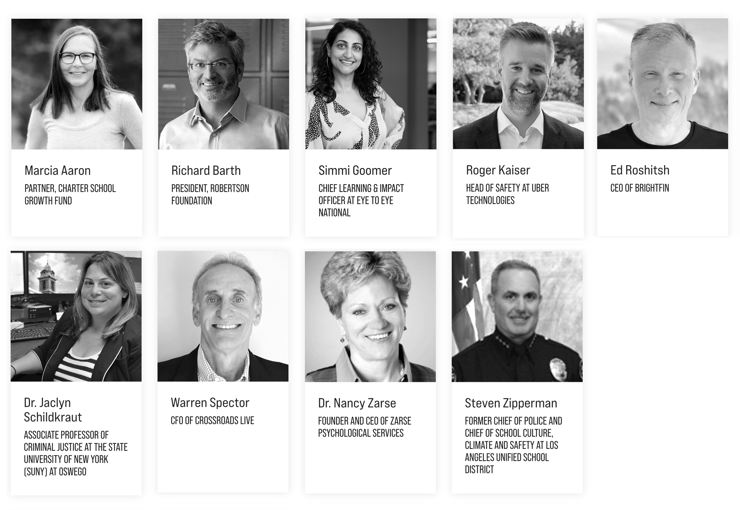 Meet our Board of Advisors:

Marcia is a portfolio partner at Charter School Growth Fund (CSGF) where she leads the organization's investments in charter school networks in Texas, Arizona, Idaho, and Utah. Before joining CSGF, Marcia was the CEO and founder of KIPP SoCal Public Schools for more than 13 years. In this role she led the organization to grow from two to 20 schools becoming one of the highest performing networks in California. Marcia previously was the founding board chair of KIPP SoCal. She had a 17 year career on Wall Street and spent the bulk of her career at Deutsche Bank and Montgomery Securities. She currently serves on the Board of Trustees for the University of Oregon and as a member of the board of Ednovate, a Los Angeles-based charter management organization. Marcia holds a BA in Journalism from the University of Oregon.

Richard has been an integral part of the education system for over thirty years. Currently, Richard serves as the President of the Robertson Foundation, a private nonprofit organization targeting high-impact grants with a results-oriented approach to philanthropy.

Prior to joining the Robertson Foundation, Richard was President of the KIPP Foundation for 17 years. In this role, he led the growth of the KIPP network from 45 to 270 schools, from 8,000 to more than 115,000 students, and from 400 to more than 45,000 alumni. Under Richard’s leadership, KIPP dramatically expanded its leadership development programs, advocated for high-performing charter schools on Capitol Hill, and secured partnerships with nearly 100 colleges and universities.

Richard came to KIPP from Edison Schools, where he served as President of District Partnerships. Prior to joining Edison, Barth was one of the founding staff members of Teach For America.

Simmi Goomer is the Chief Learning & Impact Officer at Eye to Eye National, a nonprofit organization dedicated to improving the educational experience and outcomes of every student who learns differently. Her work expands the impact and reach of services, and drives the organization’s learning and programming agenda.

Simmi has spent her career driving a greater, positive impact in education organizations across the country. Simmi began her career as a special educator in a specialized, public PreK-21 school in NYC, where she developed a deep understanding of the challenges learners face and the transformative power of a responsive and affirming community. Beyond the classroom, Simmi has worked in administrator roles at the school and district level across the public and independent school landscape. As the top educational leader for organizations in the ed+tech space, she directly managed seven lab schools before driving central initiatives such as PD programming and global special education learning networks.

Roger Kaiser is the Head of Safety at Uber Technologies, the world’s largest rideshare and transportation company, where he is responsible for the safety risk management of the platform. He has previously led Uber's customer support program for safety incidents as well as the company’s Law Enforcement Operations team.

Under Kaiser’s leadership, Uber developed and implemented the standards for how the company strategizes about, defines the success of, and executes in the core areas of Safety, Risk/Fraud, and Document Compliance.

Before joining Uber, Roger spent 10 years in Federal Law Enforcement. During that time, he served as a Supervisory Special Agent in the Air Force Office of Special Investigations (AFOSI) overseeing criminal investigations, counterintelligence operations, and force protection missions. He was a Senior Liaison to the Office of the Director of National Intelligence in Washington D.C. Roger holds a Bachelor’s degree in Psychology from Boston College.

For 20 years, he has built and coached high-performance teams that have increased sales, revenues and profits. Ed currently sits on several advisory boards and is an active angel investor in software startups.

In addition to his role as CEO of brightfin, Ed is the founder and CEO of Holidays for the Heroes, a 501c3 who sends active-duty service members home for the holiday season through the contributions of patriotic donors. Ed holds a BSBA degree from Indiana Wesleyan University and is a proud veteran of the US Air Force.

Jaclyn Schildkraut, PhD, is an associate professor of criminal justice at the State University of New York (SUNY) at Oswego. A national expert on school and mass shootings, Dr. Schildkraut’s work focuses on the effectiveness of policies aimed at prevention, mitigation, response, and recovery.

Since 2018, she has conducted the largest study in the nation on the effects of lockdown drills on school participants and skill mastery, and she consults with school districts to help improve their emergency response plans.

Schildkraut is the co-author of three books, including Lockdown Drills: Connecting Research and Best Practices for School Administrators, Teachers, and Parents (2022, forthcoming), and served as the editor for two additional volumes. She has published more than 30 scholarly articles on topics related to mass and school shootings, as well as school security. Schildkraut’s research and expertise are regularly sought after by local, national, and international news outlets.

Warren Spector is the CFO of Crossroads Live, one of the leading producers of large-scale theatrical entertainment. Over his 30-year career in the media industry, Warren has directly overseen structured credit transactions of more than $2B that positioned companies for strength during economic downturns. He also catalyzed revenue capture through the negotiation of large distribution agreements and M&A.

Warren holds an MBA from UCLA’s Graduate School of Management and BA in Economics from UCLA. He serves on the board of a Disney family foundation, where he has been a member of the investment committee since 1993.

As founder and CEO of Zarse Psychological Services, Dr. Nancy Zarse specializes in the assessment and management of risk of violence, serving as Industry Expert on Violence Prevention for global corporations, national companies, and school districts.

During his tenure at LAPD, Chief Zipperman reached the rank of Captain III, and worked numerous officer and supervisory assignments including patrol, vice, narcotics and Special Response Units – as well as LAPD Command Officer.

2022 was an exciting year of growth for the Joffe team, enabling us to help keep communities safe across the nation. Take a look at just a few of...

What this Year May Bring: Five Things We Expect in 2023

2022 is officially a wrap! As we look ahead to the 2023 calendar year, lessons and trends from the past 12 months can shed light on what may be in...

Making sure students are both physically and emotionally safe on the best of days can be a full time job for teachers and school leaders. It can...